We have also fully reworked the light scattering system, added useful features and fixed a number of bugs. Note that this is a Beta release, meaning that it is not fully optimized and tested. Full documentation, changelog and video tutorial is in progress.

Included with the purchase – Macbeth ColorChecker node setup!
Get it in the downloads section. 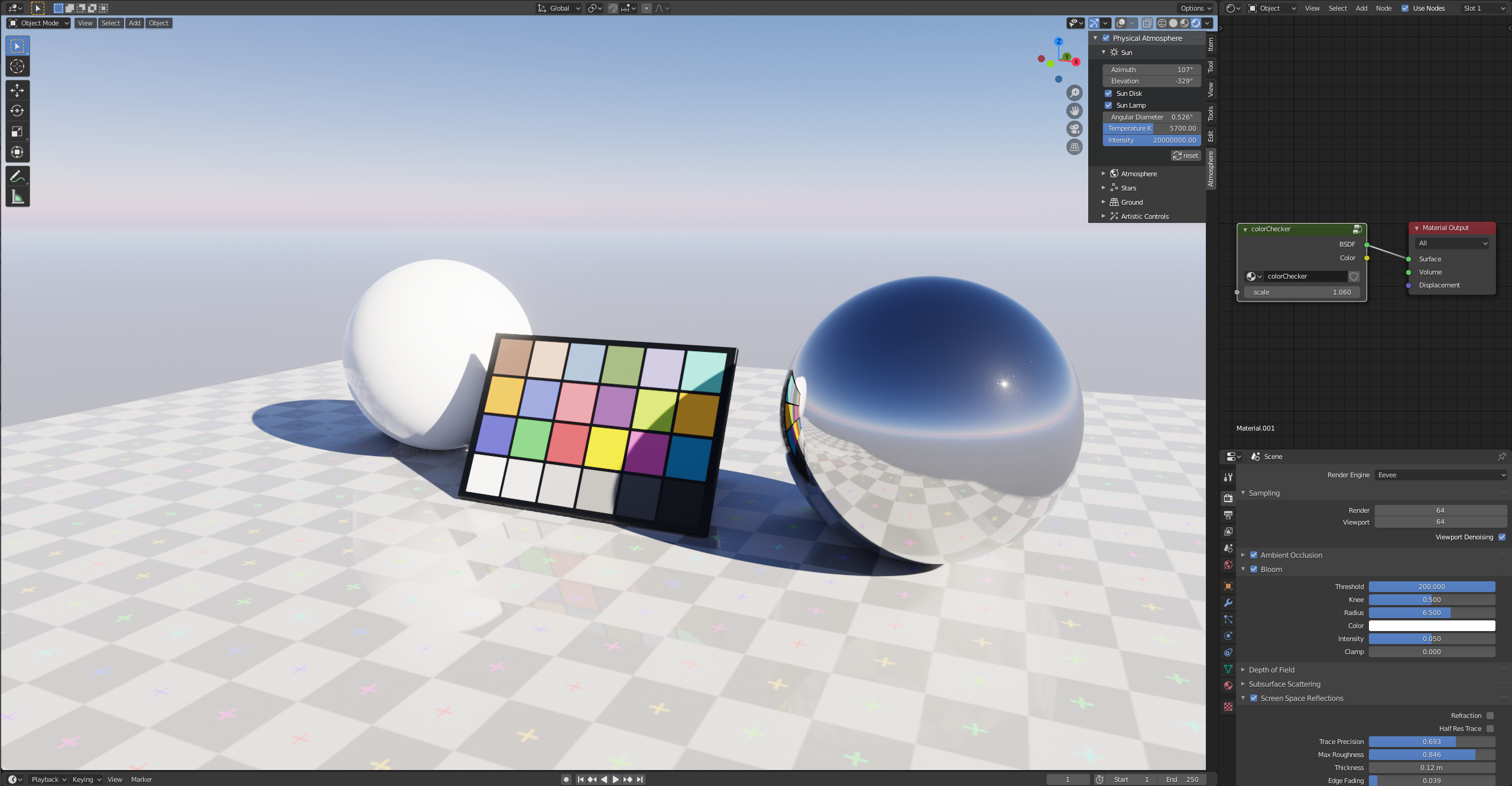 “Physical Starlight and Atmosphere” is a full outdoors lighting simulator that takes inspiration of ‘sandbox’ game worlds and editors, bringing visual consistency between every object in the scene.

Apart from our Sun, this addon can simulate any other star. Sky is not only static sky dome, but the whole atmosphere – from ground to the space and beyond. Calculations are based on physical properties of how light is interacting with gaseous medium.

How does it work?

This addon fills your Blender scene with air (or any gas of your liking) where density at the ground level is the highest and in the space – lowest, then a Star of your choice illuminates the air using physics laws – easy as that!

Lighting is calculated based on Rayleigh theory of light scattering through gaseous and liquid medium. Most critical part of the calculation is the fog. Like in real world, it changes based on altitude of observer.

Although my work is based on physical functions and research, my usual approach is to stick with what looks right. That’s why there are some ‘artistic’ liberties taken (or rather, manually fitted values based on reference images) to make it stand out from the crowd.

Outdoors lighting is essential and Blender still has no proper skylight system available. Preetham and Hosek-Wilkie sky included in Blender is very rudimentary and practically unusable. Even skylight systems in other software suites are very limited.

A common practice in almost all of CG software is that components like sky, sun, fog, water, clouds, lighting is considered separate entities and they do not interact to each other. In real, physical world everything influences everything. Even bigger issue can happen when different components are created by separate teams. It causes issues where one component looks amazing and realistic, but then everything else looks off and disconnected. Then artist`s responsibility is to find the issues, tweak the settings, add fake lights and other “magic” to connect the pieces back to a nice overall render. At least this has been my workflow for many years and it just felt wrong.

I developed my own rendering system in GLSL for BGE (Blender Game Engine) with which I made most of my projects. It was made with PBR (Physically Based Rendering) in mind. System was time consuming to adapt to other projects so I started to play around with shader node editor. To my surprise, It was possible to “translate” most of it. And with many months of work, I managed to create a first usable version. Then a year later of constant research and optimizations I finally have this addon!

Now considering that I developed my old rendering system closely with ocean, clouds, rainbow (!) and weather system, this addon will grow into a considerable mess. This is why I am developing other components simultaneously to be later combined with atmosphere in a sensible way.

Industry is still using good old HDRI light probe method to do outdoor lighting, and for a good reason – it is the simplest way to simulate realistic lighting conditions, without worrying that it will look wrong. After all it is a 360° snapshot of a real environment.

HDRI probes unfortunately are not able to capture one crucial aspect – the fact that sky is dynamic. Sky is not just a membrane of the imaginary rim of the sky, it has volume. Sky is atmosphere and atmosphere is a physical medium consisting of a blend of gases. Sky literally starts just outside of your eyeball and extends to the outer space. Sunlight travels through this medium illuminating, scattering and absorbing in it.

procedural skies to the rescue!

Procedural skies are more common in games industry, and there the industry have developed way past the static HDRIs, skyboxes or skydomes. Just take a look at the amazing sky system for Horizon Zero Dawn

During the years I have been working with, probably, every existing atmosphere system, starting from the good old O’Neil’s “Accurate Atmospheric Scattering” method, to Preetham model, Eric Bruneton’s planet rendering, and Hosek-Wilkie’s physical sky model. Each of them have their strengths and, unfortunately, also weaknesses. In fact, none of the existing methods proved versatile enough worth my time making an addon for Blender.

So I decided to develop a method from (mostly) scratch – The starlight and skylight system I wish existed!

I have helped my friends in film, games and animation industry with sky rendering and they have always told me that I should do this for a living! Well now is the time when I feel old enough to stop working for others and start working on what I (and, apparently, others) believe the most.

I have been freelancing all my life, I survive from salary to salary and this has impacted my focus on what I love the most – developing stuff for Blender.

Support me and you will have quicker responses from me and faster development speed for upcoming versions and new addons.

My vision is to do this as my main source of income so I can continue making great tools for Blender. 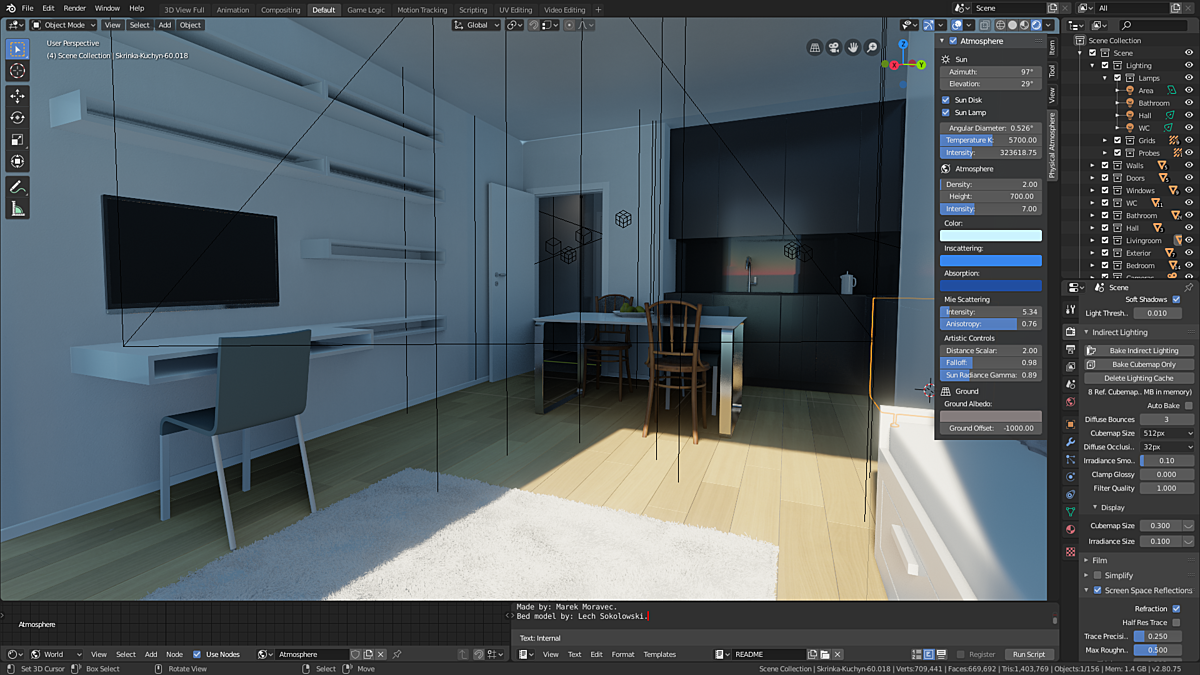 Awesome time (and your money) saver!

I know, I have given all my previous resources for free and under CC license, mostly because I did not want to deal with consequences or pressure of responsibility. Now this time I am taking full responsibility for my work and giving it a proper price results in user feedback and constant updates. I have spent considerable amount of effort making it the best outdoors lighting engine in industry and I mean to keep it that way.

I`ve been using it for few projects and this tool already have saved me many hours of work and hundreds of euros on HDRi probes.

I did the test

With HDRI probe method it usually took me at minimum 2 hours per project to find the best matching environment map (desired sun position, overcast or not, urban or greens, camera altitude, etc.) . Then buying it, setting it in the scene, waiting for data to load, render, fine tune, render… till you get the desired result.

Then I used this tool and matched the lighting in minutes. That puts things in perspective.

I have been using 3 of the most popular skylight models in the industry and eventually found them limiting. Here’s why.

Nishita model (implementation by Sean O’Neil) was the first one I used. It is fast and, back then, quite revolutionary. But it is now surpassed visually by other methods.

I switched to Hoffman-Preetham sky  by modifying Simon’s code, I got convincing results and used this method for a long time. It was simple to integrate, it is fast and it is still used in many industry products – NASA, three.js and babylon.js used my adaptation of it. Despite the fact that it looks good, it did not work as a HDR probe light source, the radiance was wrong and Earth’s shadow was missing.

..to Hosek-Wilkie physical sky model that fixed the luminance and added proper Sunlight radiance. Problem with this method – now the lighting looked correct, but the skies themselves just does not look right at all, especially at lower sun elevation. Also there is a limited number of parameters for scattering (this technique relies on measured data-set) and volumetric fogging was missing. This is a great and accurate technique as long as you don`t see the sky itself. Also – does not work on spherical planet model and no Earth’s shadow!

The closest method of real atmosphere is Eric Bruneton`s precomputed atmospheric scattering
It has almost all – great luminance model, visually closest to real sky, spherical planet model, Earth’s shadow, multiple scattering, fog. Unfortunately, after many attempts I found it impossible to implement it in Blender and its Shader Node editor. It also requires pre-calculation of dataset. If I get smarter, I’ll revisit the code once again.

While looking for similar products, I noticed that most of them use one of my listed methods above. All of the products contain not only the sky rendering, but the whole rendering engine and materials system. But considering that Blender itself does that for free, I think it is a fair comparison.

Lumion rendering package for architects come the closest with the features and it will cost you € 1499 for standard license and € 2999 for Pro.

VRay from ChaosGroup has VRaySun. It is using Hosek-Wilkie sky, Preetham and CIE (clear and overcast), all of these are analytical sky models and tied to an observer on ground. Price for the rendering package – €340 a year.

Autodesk Arnold plugin has Physical Sky, and again it uses same Hosek-Wilkie model, and it costs €685 a year.

In any case “Physical Starlight and Atmosphere” + Blender 2.8 is a pretty damn good value!

Who is this for?

I made it for myself. I have high standards, and I value my time. At one point in your expertise, you find yourself optimizing your workflow to be more effective. So I created the addon with simplicity and rapid deployment in mind.
Amateurs will love eye candy it delivers one button away! Pros will appreciate high customization options in the UI. Shader node enthusiasts will surely dissect the world node setup – make it yours. And look for ‘Easter eggs’ I left there.

You and your computer will appreciate the low video RAM consumption, instant preview and ultra-fast rendering. 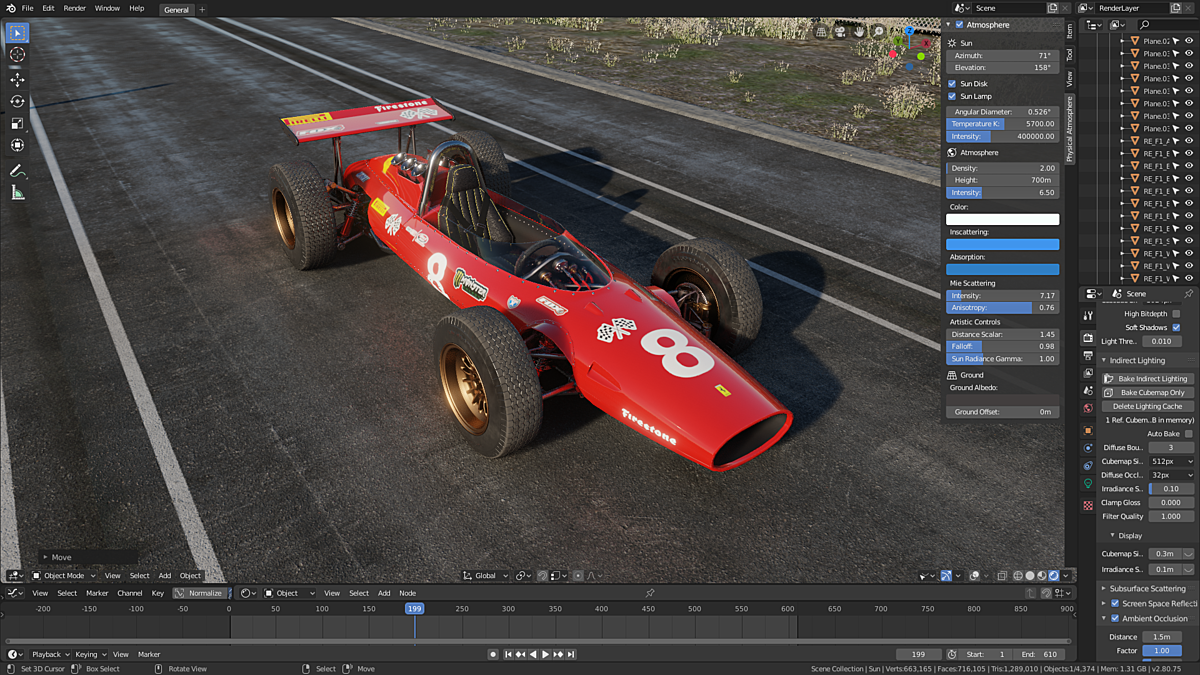 This product will have tight integration with upcoming line of free and paid addons.

I am making them as plugins, because others might not need all the features of the atmosphere, this also reduces the clutter.

I welcome suggestions, criticism and feedback, after all – it is a community project.

Why trust me and RIG on this?

RIG (Riga Innovation Group) is a collective of highly skilled industry professionals. We value our time so we use best tools we can.

I’ve been around Blender community for more than a decade. Those who know me as ‘martinsh’ in Blender forums, will know my love for Blender Game Engine. Till this day I have published countless of free resources on BlenderArtists forums, my blog and my YouTube channel. I am an active local CG, VR and Blender community member. I`m traveling to Blender conference every year where I even led a shader workshop once. I am guest lecturer at universities and now a teacher in art school – teaching my own experimental course in ‘Lighting and Materials’.

I have studied traditional arts for 13 years, worked as a painter and illustrator. For the last decade I have been working for computer game, film, medical and scientific VR simulation industries. I became lead technical artist and CG supervisor, with a specialty in photo realistic rendering.
My responsibility have been rendering pipelines and shaders for real-time graphics engines.

I have worked on short and feature films as a CG and consulting studios on incorporating 3D CG into traditional animation.

Now after more over a decade of different jobs, I have my own company where I am condensing my knowledge into upcoming line of Blender addons. With a focus on rendering, photo-realism and features that does not yet exist for Blender and even any other CG software packages. 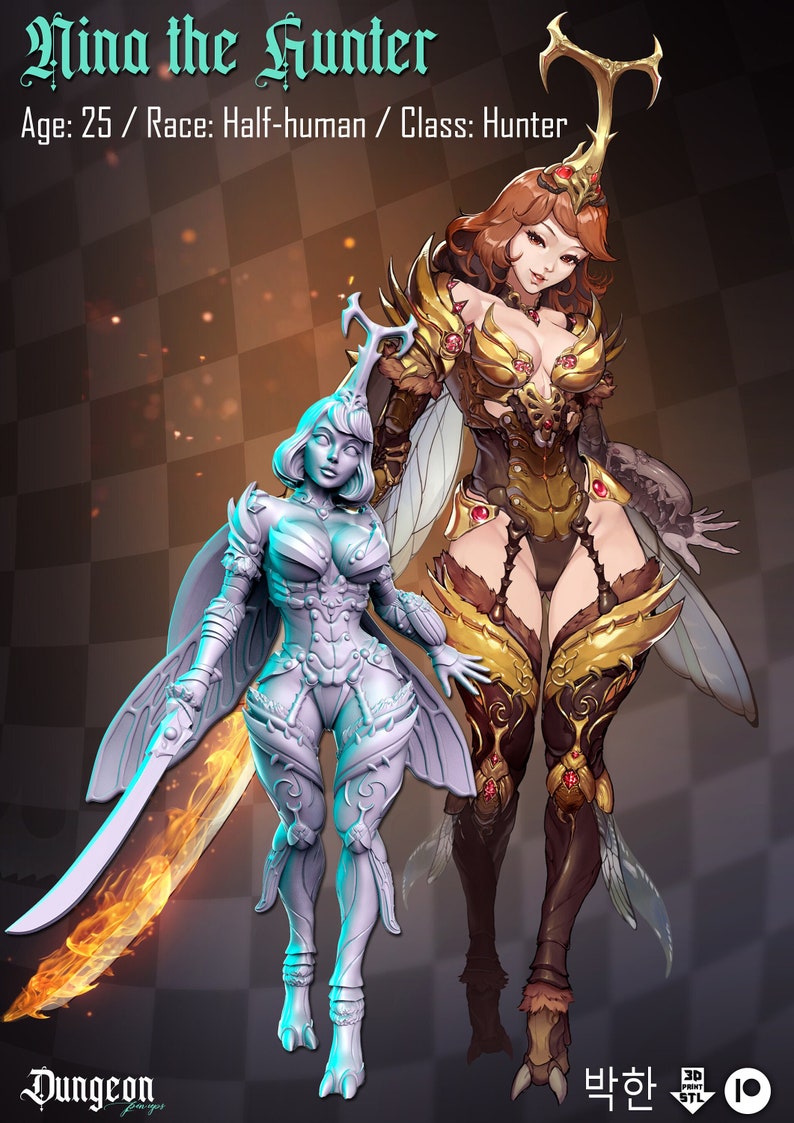 This is a resin miniature of Nina the Hunter by Dungeon pin-ups. All miniatures ship unpainted and unprimed.…

Alena 3d model is a next generation 3d model that uses complex skinning, advanced materials and lightning. It…