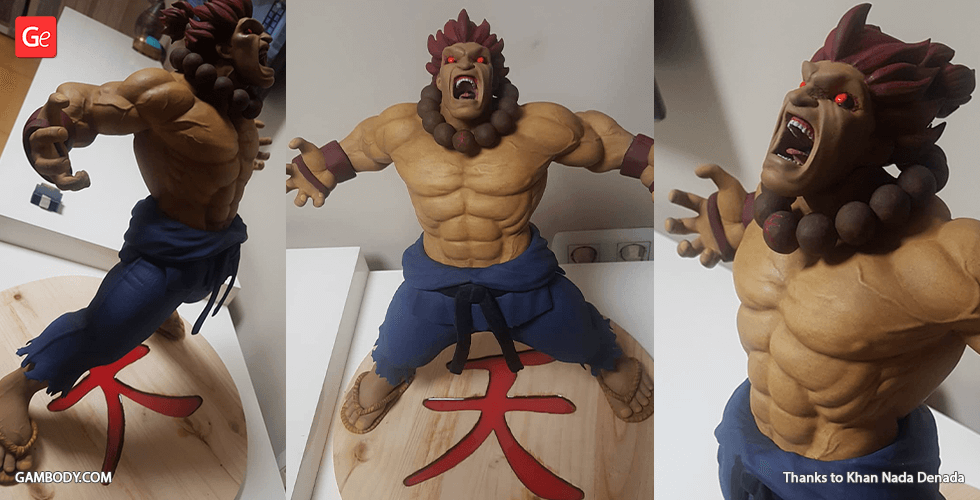 Akuma and his brother Gouken were disciples of Goutetsu. Goutetsu taught them a life-threatening martial art that includes elements of karate, judo, and kempo. He also taught them the punch of Shun Goku Satsu, a deadly technique that, although incredibly powerful, exposes the big danger to that who used it. Between the brothers, a dispute arose about the true understanding of the meaning of martial art. Gouken could not agree with the violent nature of the combat style taught by Goutetsu. Therefore, he left the teacher and founded his own dojo and began to practice his fighting style. Akuma, however, continued his studies with Goutetsu, to bring his technique to perfection and comprehend the meaning of Goutetsu’s art, as it is. In order to comprehend Shun Goku Satsu, Akuma followed the principle of Satsui no Hado, this is the aura of the instinct to kill. Through Satsui no Hado, Akuma was forced to give up any compassion for any living creature. In addition, Akuma realized that his level as a master of martial arts can be significantly upgraded and left to practice without the help of Goutetsu. After a while, Akuma demonstrated their strength by killing their former teacher with Shun Goku Satsu. Goutetsu fell with a sense of inner joy, realizing that his pupil had mastered the nameless art. Akuma took the bead necklace from Goutetsu’s neck and put it on his own. Akuma began to search the world for worthy opponents with whom he could fight.

ABOUT THIS 3D MINIATURE

The model is saved in STL files, a format supported by most 3D printers.

FDM version features:
– Contain 10 parts;
– Made in Rage pose;.
– Platform made with “Heaven” hieroglyph;
– All parts are divided in such way that you will print them with the smallest amount of supports.

SLS/SLA version features:
– Same as FDM but made as 1 part.

All STL files for 3D printing have been checked in Netfabb and no errors were shown.

There are 10 parts for FFF/FDM version and 1 part for SLS/SLA version.