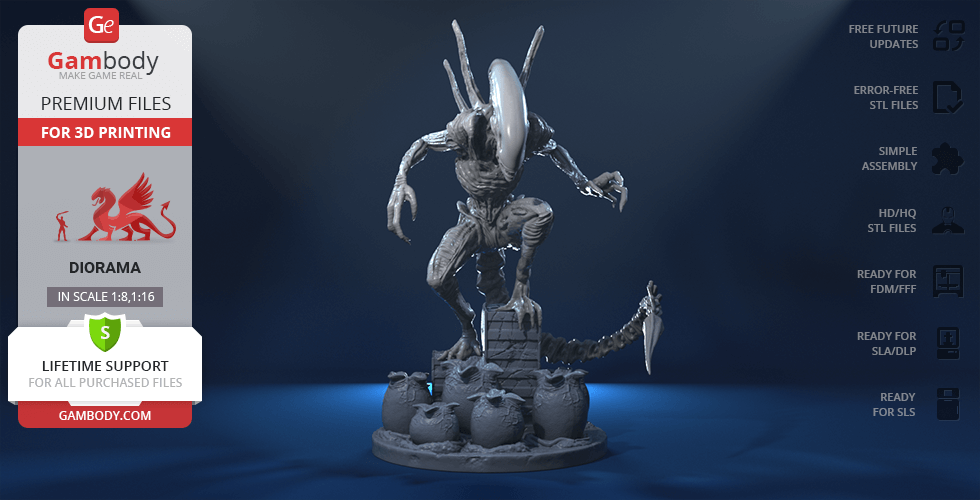 Xenomorph is a menacing extraterrestrial species, one of the deadliest of all known aliens that was first seen in 1979 as a terrible antagonist in sci-fi horror classic Alien. They say that the impact of this horror film series is inestimable – the whole genre that now features a bewildering variety of deadly extraterrestrial creatures is considered to have been launched once the alien classic was first released on the big screen. Xenomorph is said to be the perfect killing machine. Small wonder, given its impenetrable exoskeleton and ability both to learn quickly and to inherit physical characteristics from its host. A characteristic feature of alien’s hunting tactics is waiting for the pray stealthily and this is perfectly conveyed in the pose the author of the Xenomorph 3D printing diorama chose to depict the monster in. It is crouched menacingly on the top of a slightly elevated construction where the alien can presumably watch the prey from but still remain unnoticed. And though the origin and back-story of Xenomorph were only theorised by the fans with every new instalment in the franchise, at least we do know where to expect the monster to appear from. The Xenomorph 3D printing diorama features the set of eggs, also known as Ovomorphs which are basically capsules containing Facehuggers – the second stage of Xenomorph’s life cycle that launches itself onto the host’s face and impregnates it to grow into an adult alien. Sounds creepy, doesn’t it? Good thing that these eggs are only hatched in their 3D printing form – that was the way the 3D artist depicted the creatures, having spent on the creative project 132 hours in total. “In space, no one can hear you scream” – but should you print your own Xenomorph with Hatched Eggs diorama you will have at least several aliens to fight on your side.

Alien Xenomorph in diorama for 3D printing is a static assembly model and its moderation and adaptation for different types of 3D printers took Gambody team 28 hours in total. For you to receive the cleanest result possible the diorama was divided into many assembly parts and each hatched egg also comes separately to be further attached to the diorama’s platform as an independent assembly piece. The cutting of the Alien Xenomorph figurine itself was chosen by our team to minimise the amount of filament needed for generated support and some of the diorama’s parts were hollowed out for you to save resin. Moreover, in order to conceal the places where the assembly parts of the model must be connected, the figurine was cut along the anatomic folds of the alien’s exoskeleton. All the assembly parts are provided in STL files in recommended positions that were worked out so to ensure the smoothness of the details’ surfaces after printing and that the 3D printing beginners won’t face difficulties when placing the parts on a build plate.

The figurine is saved in STL files, a format supported by most 3D printers. All STL files for 3D printing have been checked in Netfabb and no errors were shown.

The model’s scale was calculated from Xenomorph’s actual height that is 2225 mm. The 3D printing figurine’s chosen scale is 1/8 for the FFF/FDM version and 1/16 for the DLP/SLA/SLS versions.

FFF/FDM 1.0 version features:
– Contains 35 parts;
– A printed model is 326 mm tall, 229 mm wide, 209 mm deep;
– Assembly kit includes locks to connect the parts without glue. One lock 35_ge_lock_7S(x14)needs to be printed 14 times;
– Made with a platform with a set of hatched eggs;
– All parts are divided in such a way that you will print them with the smallest number of support structures.

DLP/SLA 1.0 version features:
– Contains 10 parts;
– A printed model is 163 mm tall, 115 mm wide, 105 mm deep;
– Made with a platform with a set of hatched eggs;
– All parts are divided in such a way to fit the build plates and to ensure that support structures are generated where needed.

DLP/SLA Pre-supported 1.0 version features:
– Contains 10 parts;
– A printed model is 163 mm tall, 115 mm wide, 105 mm deep;
– The STL files that this version comprises are pre-supported, hollowed out, and have drain holes where needed;
– You may choose to print the STL files one by one or several at once, depending on the dimensions of your resin 3D printer’s build plate;
– When slicing several STL files at once, the attachment layers (Platform Touch Shape) may overlap, but the supports must not come into contact.