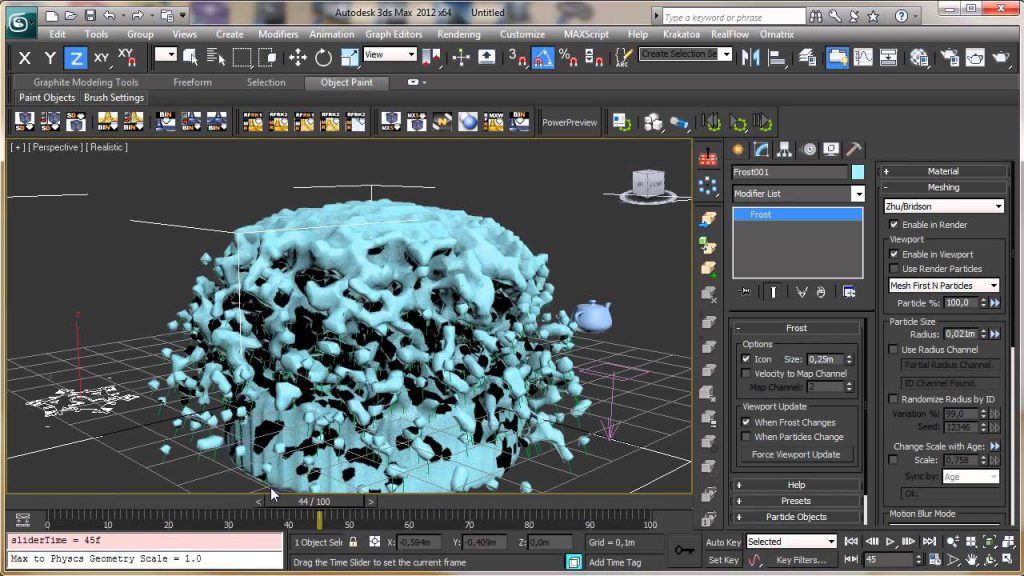 This tutorial will guide you through your first steps while exploring the basic capabilities of the FROST particle mesher.

This tutorial assumes that you have installed FROST as described in the Installation Guide and have licensed it according to the Licensing Guide. If you are running FROST in Demo Mode, keep in mind that some steps described in this tutorial will produce slightly different visual results due to the limitations described here.

It also assumes that you have customized your User Interface by dragging the MacroScript Icons from the Customize User Interface dialog to a Frost toolbar as described in the Creating Frost Objects chapter of the User Manual.

For our first experiment with FROST, let’s create a Standard Particle Flow, modify it a bit and create a Metaballs mesh out if its particles.

RESULT: A new FROST object will be created and the selected PF Source system will be added to its Particle Objects list automatically.

The color of the FROST object will be the same as the color of the PF Source, and the position of the FROST icon will be centered at the source object (thus if you would have created the FROST on a frame other than 0, the icon would have appeared halfway up the stream). This is done to allow the creation of a FROST object from multiple selected sources – in that case, the FROST icon will be placed in the center of all selected objects and its color will be an average of all objects’ wireframe colors!

Move the time slider and watch the Particle Flow being converted to a Union Of Spheres mesh by FROST. Union Of Spheres is the default meshing mode and is good for fast previews, but the quality of the viewport mesh will be relatively low with the factory default settings, so let’s look at the FROST UI in the Modify Panel and tweak some parameters…

Let’s modify the mesh resolution of our FROST object to produce a higher quality mesh:

RESULT: The viewport mesh of the FROST object will increase resolution and form better-shaped spherical blobs.

The default settings of the FROST object use the Relative to Max. Radius set of controls. In this mode, the resolution is calculated by searching all particles for the largest radius and then taking a fraction of that radius as the size of the grid used to calculate the final mesh. Thus, higher values produce a finer grid resolution as the max. radius is subdivided more. This mode is very adaptive and allows you to play with the particle size freely without losing neither speed nor quality as particles become very small or very large – the mesh will adapt its resolution to the largest particle’s size.

Right now, all particles use the same particle radius value provided by the Radius parameter located in the Meshing rollout. The default value is 5.0. Let’s tweak this value and see how the particles will change.

Changing the Meshing Mode To Metaballs

As mentioned previously, the default Union Of Spheres meshing mode is faster for quick previews in the viewport, but the spheres are not merged smoothly together – compare the illustrations on the Meshing Modes page.

Let’s switch the meshing mode of our FROST object to Metaballs:

RESULT: The FROST mesh will become smoother, blending the influence fields of the particles much better.

The default settings of the Metaballs mode are Radius Scale 1.5 and Surface Level 0.3. Play with the two values a bit to see how they affect the mesh.

Currently, all particles have the same Radius of 10 units. Let’s apply a random variation based on the particle ID channel.

Other than Particle Flow, the Frost Variation % value only reduces the particle size down to the specified value, but does not increase it above the Radius value. To produce larger particles, you will have to increase the Radius.

Play back the animation or drag the time slider.

Notice that the random size variation sticks to the particles throughout their life.

This is because the random variation is based off the Born ID channel of the particle – a unique value given at birth to every particle in Particle Flow. The same is true for Thinking Particles, but in the case of sources like geometry, particle files etc., the ID channel might not be present. In those cases, the order of the particles within the stream (in other words their Index) will be used instead. The text field just above the Randomize Radius by ID checkbox will display relevant information about the state of the ID channel!

As mentioned previously, the Relative to Max. Radius option is fast and allows very large particles to be meshed adaptively since it uses the size of the largest particle to determine the resolution of the mesh. But with Randomize Radius by ID turned on, we now have particles with varied sizes, and while the current Relative meshing produce enough resolution for the larger particles, the smalles ones appear edgy and misformed.

We can either increase the Relative meshing value, or switch the FROST object to Absolute Spacing which defines the size of the polygons in world units and does not change as particles change size. Let’s do the latter:

RESULT: Note that the FROST mesh will now have enough definition to display the smaller particles as rounded shapes.

So far, we controlled the size of the particles using the global Radius value in FROST, as well as the options to randomize the radii based on the particle’s ID.

As you can see, both the Size and the Scale channels of the Particle Flow affect the Radius value seen by FROST. The same applies to Thinking Particles.

This means that we could now add a Scale operator to Particle Flow to change the Radius of the particles over time.

The particle scale is not the only channel that we could animate to affect our FROST object. Let’s animate the Vertex Colors of our particles based on their Age…

The following works only with the LICENSED version of FROST and CANNOT be done with the DEMO which shows no shaded mesh in the viewports and does not render.

RESULT: The FROST object will show red colors where the particles are young and yellow where they are scaled down to 0.0 at age of 50.