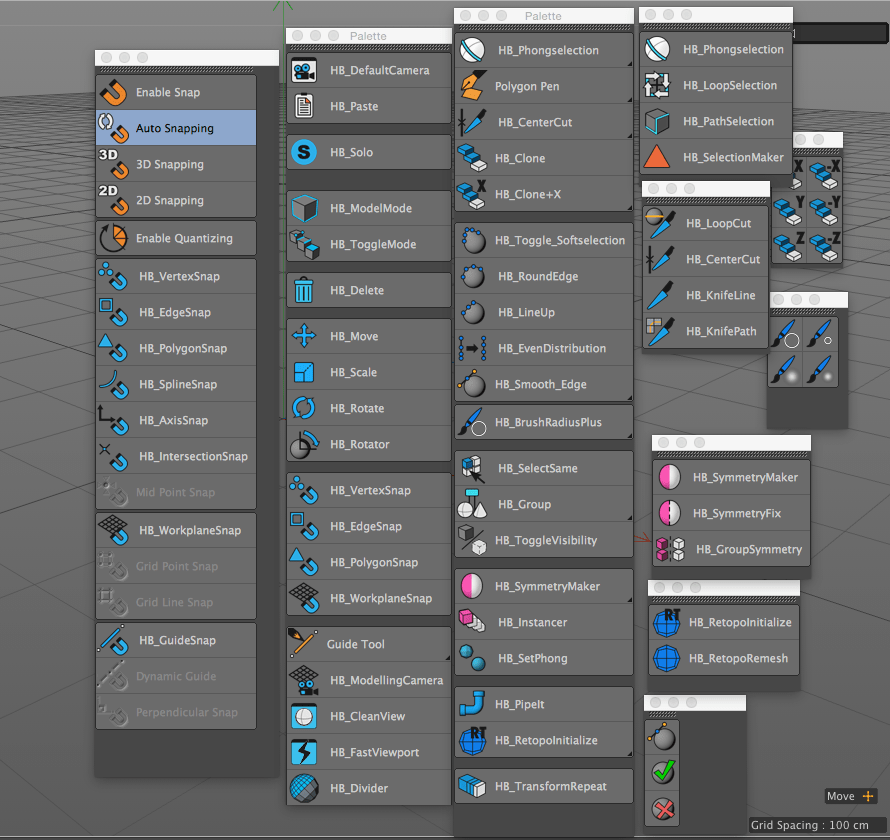 HB ModellingBundle is a set of over 70 Scripts for CINEMA 4D which are dedicated to 3D-Modelling. The goal of these scripts is to improve workflows and to do many operations a lot faster. This means less clicks and less mousemovement. With HB ModellingBundle you receive not only more than 70 Scripts but also a very well chosen set of shortcuts and a modelling-Layout for C4D. Also a template C4D-Scene which shows tools-settings in the viewport which makes working in Fullscreen mode much easier.

HB ModellingBundle is the result of 10 years working with CINEMA 4D as a professional 3D Generalist. Holger begun early to create his custom scripts to make any repetitive process in C4D a lot faster. Over the years he has added a lot of stuff and the collection is still growing. To get a better Idea about the Bundle you should watch the Videos on youtube to understand the potential for you.

UP TO 10 TIMES LESS CLICKS PER OPERATION

If you are willing to change some behaviours and use scripts with shortcuts, you will very quickly feel what it means to work with HB ModellingBundle. It is safe to say that the most frequent actions you do in C4D for modelling, will now be accomplished in 2-10 times fewer clicks.

HB ModellingBundle includes all of the scripts below. New scripts will be added in future versions of HB ModellingBundle which will be free to all customers. You will receive fast and detailed support using a direct support email address: support@holgerbiebrach.com

7 Clone Scripts
– clone polygons along an axis and align without gap.

HB_DefaultCamera
– use default editor camera and make some other settings.

HB_Divider
– change subdivisions of any parametric object or reset settings.

HB_Group
– group each selected object under a null.

HB_Instancer
– make instances of all selected objects while the last selected is referenced.

HB_ModellingCamera
– creates a local workplane on the selected components and an orthogonal camera.

HB_ModelMode
– makes some settings and toggles to model mode.

HB_Move
– move tool with some settings.

HB_Rotate
– rotate tool with some settings.

HB_Scale
– scale tool with some settings.

HB_SymmetryMaker
– deletes half of the object and puts it into a symmetry object.

HB_ToggleMode
– toggles modes between points/edges/polygons and makes some other very nice decisions.

HB_MaterialOverwrite
– overwrite materials in the Viewport.

• NEW : HB_ZoomCamera – (Special Camera to focus on areas for rendering)

• NEW : R18 compatibility for Knife Scripts
• NEW : Additional Modo ColorScheme
• NEW : Additional Modo Material
• NEW : HB_OberwriteMaterial will apply a Modomaterial if no Material is selected and Modomaterial present in Contentbrowser
• FIXED : Issue with HB_Relax where the Object jumps to Zero sometimes
• FIXED : Issue with HB_EdgeToSpline where multi segment Splines would not work sometimes.